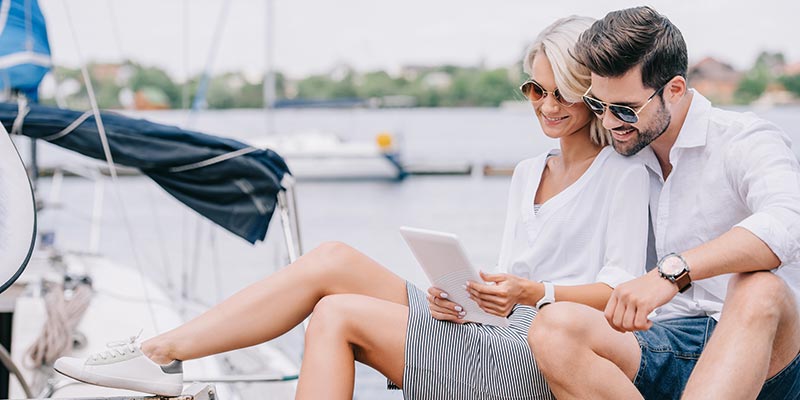 The settled charter price includes the charter of a yacht. Harbor dues, taxes and fuel costs are not included in the price.

The chartered yacht(s) can be used only after the payment has been regularly settled.  50% of the charter price is to be paid upon booking, the rest 4 weeks before embarkation; unless differently settled by contract or invoice. Apart from the charter price, all additional costs, as well as the security deposit, are to be settled upon embarkation.

If the charterer for any reason gives up the charter he can, if previously agreed with the provider, cede his rights and obligations to another person. If he fails to do so, the costs of cancellation shall be reimbursed from the advance payment as follows:

If the cancellation is due to objective reasons (death of a family member, serious injury, war or other) the received down payment shall not be paid back, but the provider shall place the yacht at the charterer’s disposal at another available period of time of similar value, or within another season.  In the case of difference in price, contractual sides will settle payment conditions in writing.

The provider will put at the charterer’s disposal a yacht in a satisfactory mechanical state, equipped according to Croatian laws and the yacht’s equipment list. The yacht is delivered with full fuel tanks, at the appointed place and at the time stated on the price list, unless otherwise defined in agreement with the provider.

The possible hidden defects on the yacht or its equipment, which couldn’t have been known to the provider at the time of takeover, as well as defects which could arise after the takeover, do not entitle the charterer to reduce the charter price.

The provider reserves the right to refuse to hand over the yacht to any person who, in their opinion, is not competent to operate the yacht. In that case, the provider can give instructions on how to handle the yacht, or provide a skipper at the charterer’s expense.

The check out time is defined by a valid price list. The charterer can arrange a different check out time in agreement with the provider. The charterer returns the yacht with full fuel tanks and in a tidy state. The charterer is required to report any defects on the yacht to the provider. The provider checks and takes over the yacht, and informs the charterer of any possible defects or damages that were not stated on the inventory list. All damages and defects that arise as a direct consequence of wear and tear, as a direct consequence of the defects noted on the inventory list, or resulting from force majeure (eg. lightning strike) are not the charterer’s liability. The charterer is obliged to pay all other damages in full amount in accordance with the article 7. of the General Conditions.

If a late return to the base is unavoidable, the base manager must be informed in order to give further instructions. The charterer bears all the costs that result from the delay, even if it’s caused by bad weather. Therefore, careful route planning is recommended. The charterer is advised to return the base in the evening the day before check out.

The yacht is insured against third party damages and fully insured for all the damages resulting from force majeure up to the registered amount of the value of the yachts for the risks according to the insurance policy.

In case of serious damages, as well as of those where other boats are involved, the charterer is obliged to report the case to the authorized harbor-master’s office and record a protocol (the course of events, damage estimations) for the insurance company. The charterer is also obliged to notify the provider of the damages occurred. If the charterer does not fulfill his obligations, he can be fully charged for the costs of damage.

All our boats are equipped with SENTINEL devices with tracking, internet,  battery and system alarms. Client can log in him self and get all infomations and alarms. Sentinel is useful for clients in order to have safer sailing.

All possible disagreements or disputes that cannot be settled peacefully, will be under the jurisdiction of the court in Zadar.